I’ve heard this movie compared to Mad Men—or maybe it was the other way around. I didn’t like this as much as Mad Men. In spite of great characters and great acting (the neighbors’ crazy son was great), and beautiful photography, it just didn’t do much for me. The principle characters, a married couple played by Kate Winslet and Leo DiCaprio, have two kids, but the kids might as well have been played by extras and barely appear in the movie. Maybe it was intentional and meaningful, but it seemed weird.

Anyway, you probably don’t come here for my review (the movie’s a few years old after all). You came for the dirt on the typographical props.

The movie is set in 1955, so there’s lots of opportunities to get things wrong. It wasn’t too bad for the most part—a lot like Mad Men in fact. The general effect is good and authentic, but things kind of fall apart in the close ups, especially in HD. (The prop people must hate HD.) Magazines look like what they are—fifty-year-old magazines. Same with other vintage ephemera. There didn’t seem to be a lot of typographic props made for the movie. I did catch one klinker, a “for sale” sign: 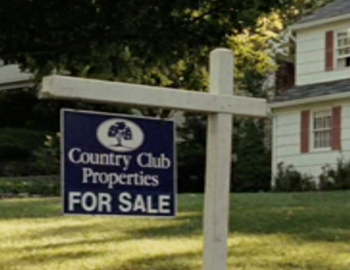