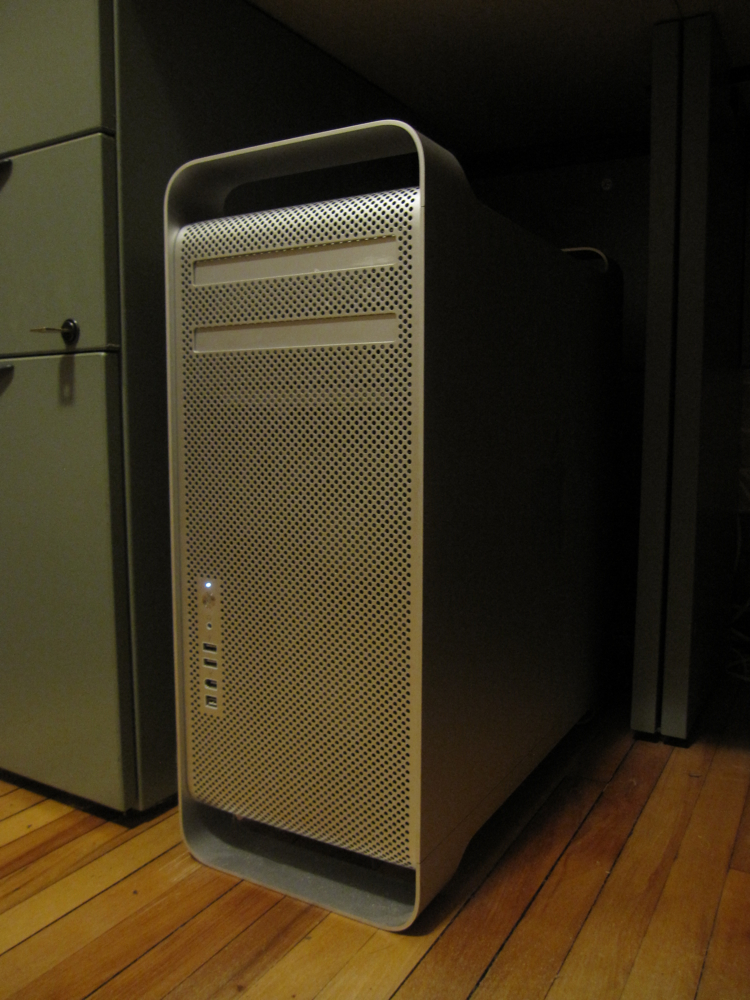 When I bought this computer in 2006, I did’t expect to still be using it in 2012. It hasn’t always been my primary machine, but it’s been in use one way or another all that time.

Apple has used essentially the same case design even longer, going back to the Power Mac G5 in 2003. I had one of those, too, and it was kind of a dog. This one is the first generation Mac Pro, which was released when Apple switched to Intel processors. I chose the mid-range model, with two 2.66 GHz Dual-core Xeon processors, a 250 MB hard drive, and 1 GB of RAM.

It was my main machine for several years, with a 15” MacBook Pro as a secondary machine for taking work on the road. Eventually, having to keep my work sync’d between them was too much trouble and I switched to a 17” MacBook Pro for everything. I retired the Mac Pro to the basement, using it as a server and for watching movies or playing music, and other non-work-type things.

About a year ago, I changed my mind. The 17” was too much of a compromise—not that powerful as a desktop machine, and it rarely left my desk, unless I was traveling. So, I got a MacBook Air and a 27” iMac. What made it possible? In a word: DropBox.

This setup worked great, but recently, the iMac started giving me the worst possible kind of trouble—kernel panics during backups. I still don’t know what the cause is, but I couldn’t trust it as my main machine anymore.

One of the things that made me reconsider it was a discussion sometime last year on Hypercritical, John Siracusa’s weekly podcast. Unfortunately, I don’t recall which show it was, but basically Siracusa pointed out one of his reasons for preferring Mac Pros over iMacs and portables: External hard drives usually have cheap power supplies. I can attest to this, having several fail on me over the years. The Mac Pro, however, has a very robust power supply and therefore hard drives you add to it are much more reliable, another thing I can attest to. I had never really thought about this before, and had even tended to use external drives with my Mac Pro. But it made a lot of sense, and now I’m sticking to internal hard drives for everything.

I’m very happy with this setup. I’ve got a really solid desktop machine now, and the MacBook Air is my all-time favorite laptop. And DropBox makes it easy to work with two machines. The most amazing thing to me is that this Mac Pro is so old and yet it has no trouble running the latest software. I’d say it was a pretty good deal.