In yesterday’s installment, I got into the unseemly details of my close encounters with the cast of Mystery Science Theater 3000. This was nothing.

Best Brains, Inc. (BBI), the production company that made Mystery Science Theater 3000 (MST3K), was located in an industrial park in Eden Prairie, Minnesota, a fact that Pat and I confirmed (surreptitiously) one Sunday afternoon in 1991. (I will neither confirm or deny that we peered into the windows.)

As a graphic designer, I was appalled by the design of the official MST3K fan newsletter, Satellite News (Formerly The Binding Polymer). It was obviously not done by a professional designer. I decided to offer my services—for free, even—to take on design and production of the newsletter. Once they saw what I could do, it would be a slam-dunk. To demonstrate, with the help of a few tapes of the show, an SX-70 camera, an HP ScanJet, Photoshop and Illustrator, and a PostScript laser printer, I did a set of mock “redesigns” of the newsletter. I sent them, along with a cover letter, to Best Brains at the end of October, 1991. 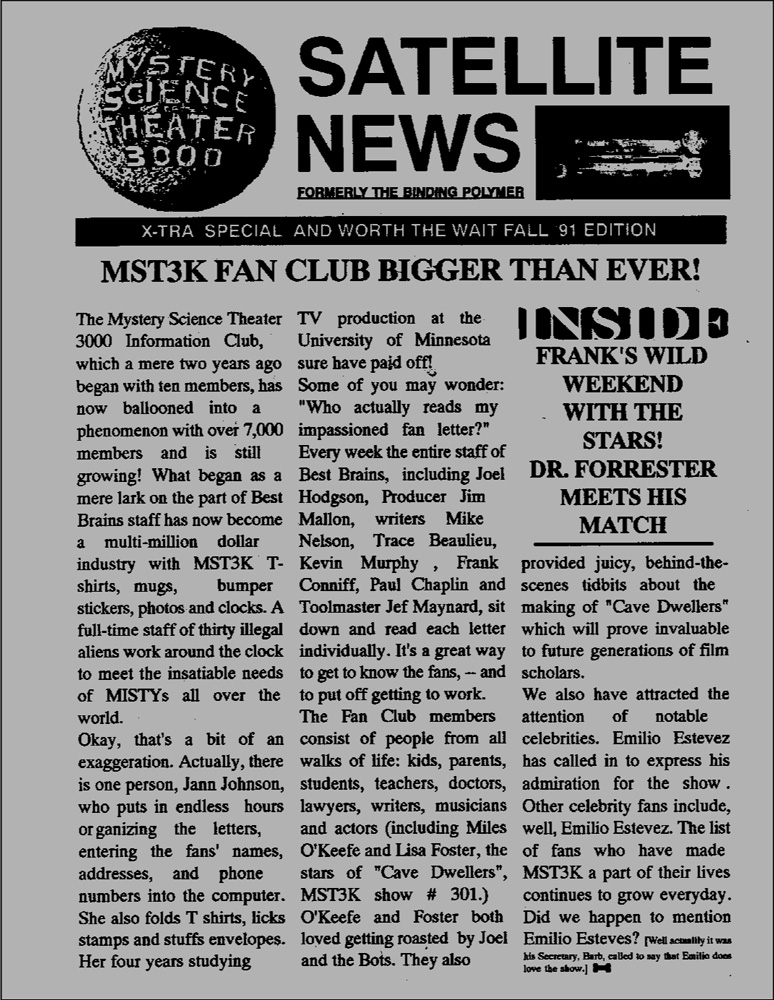 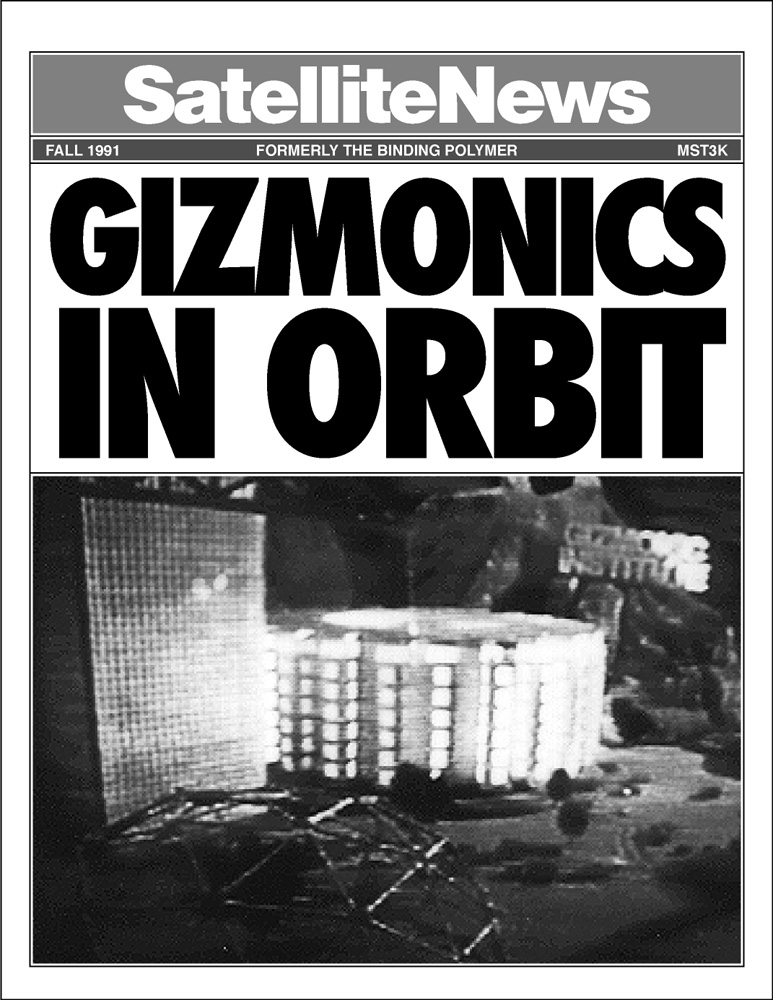 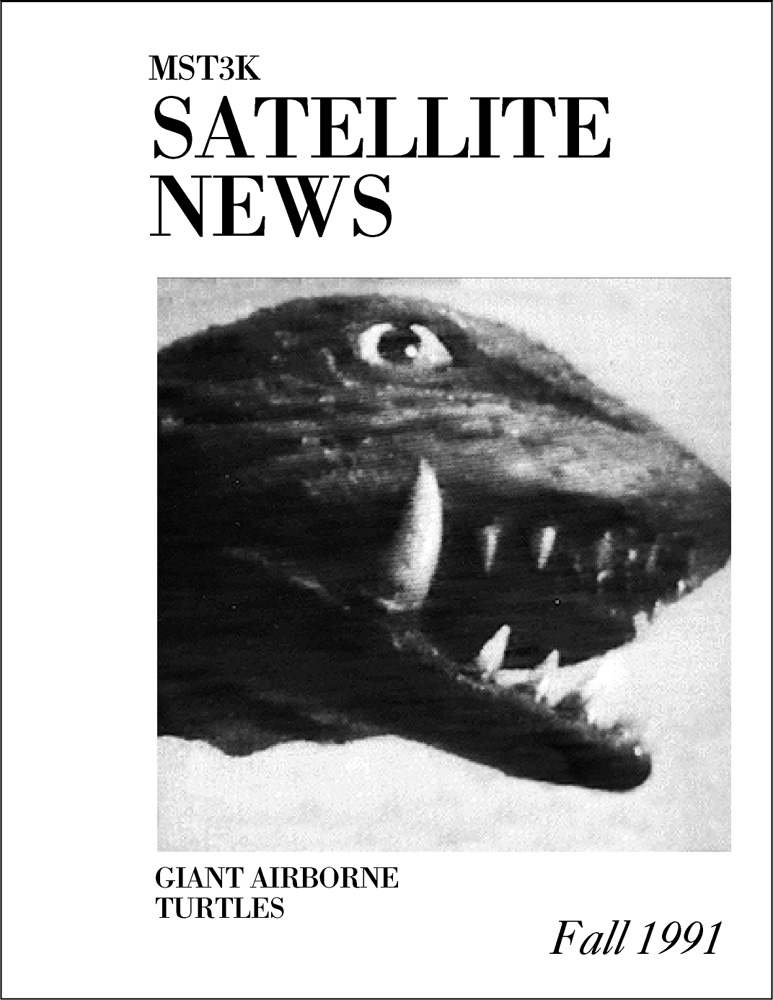 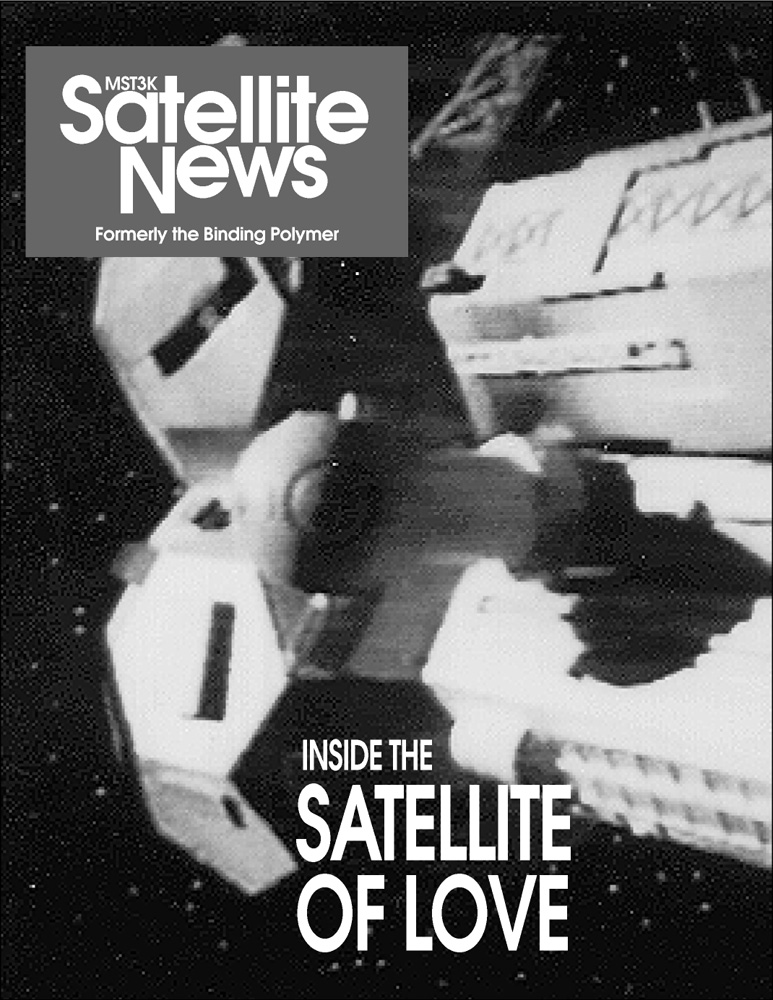 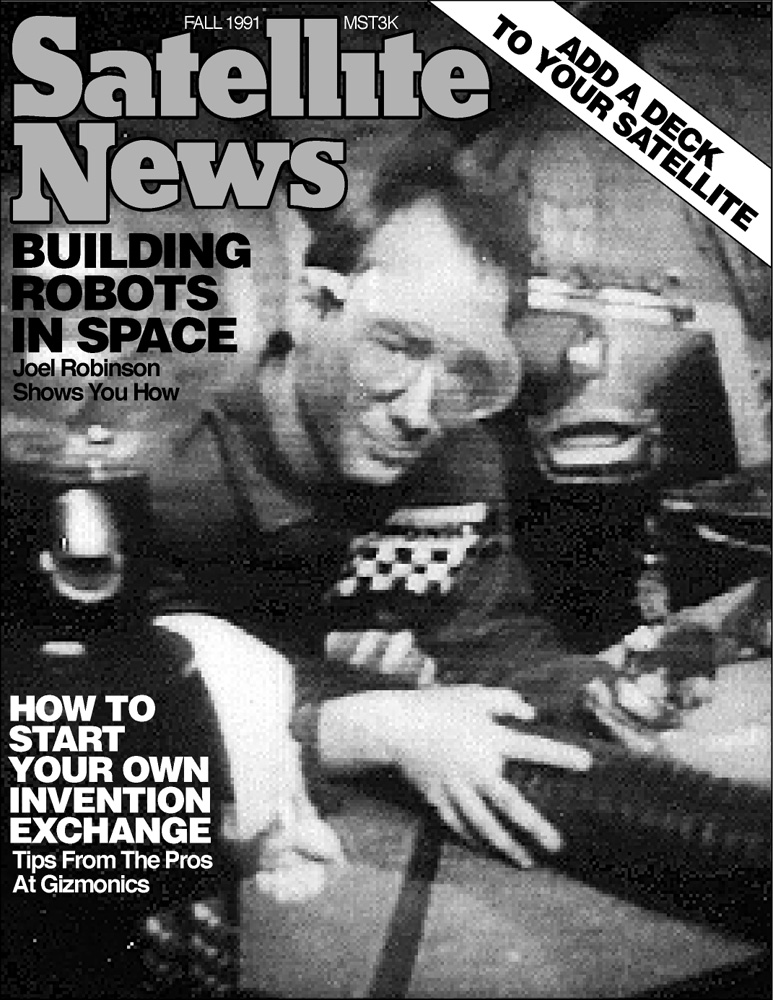 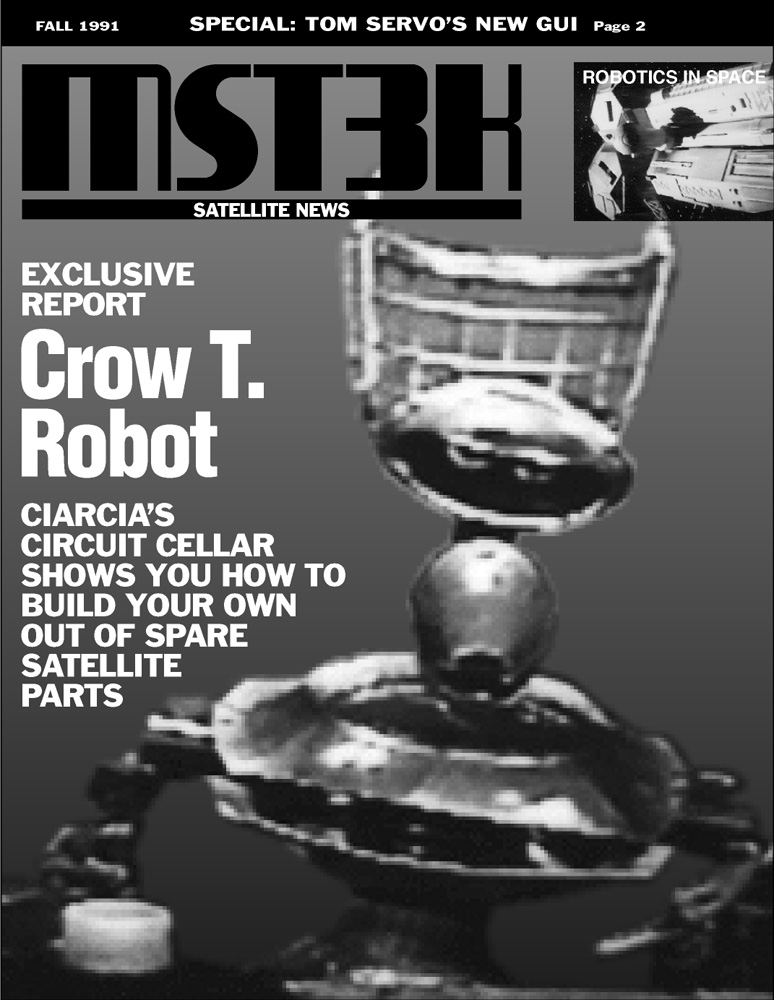 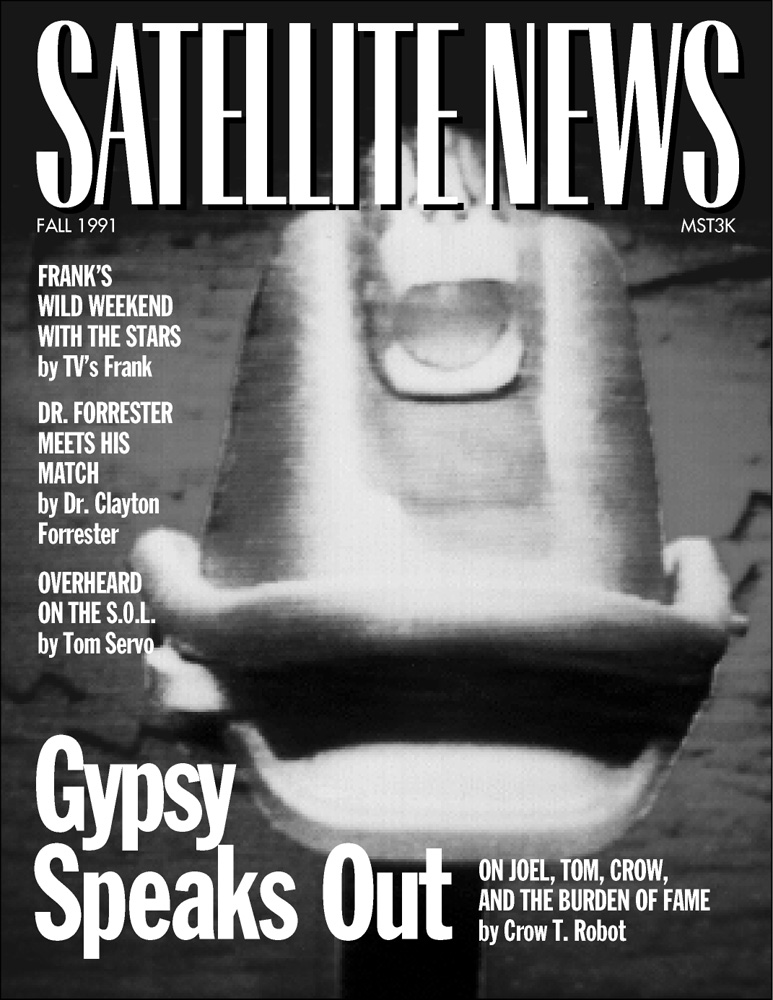 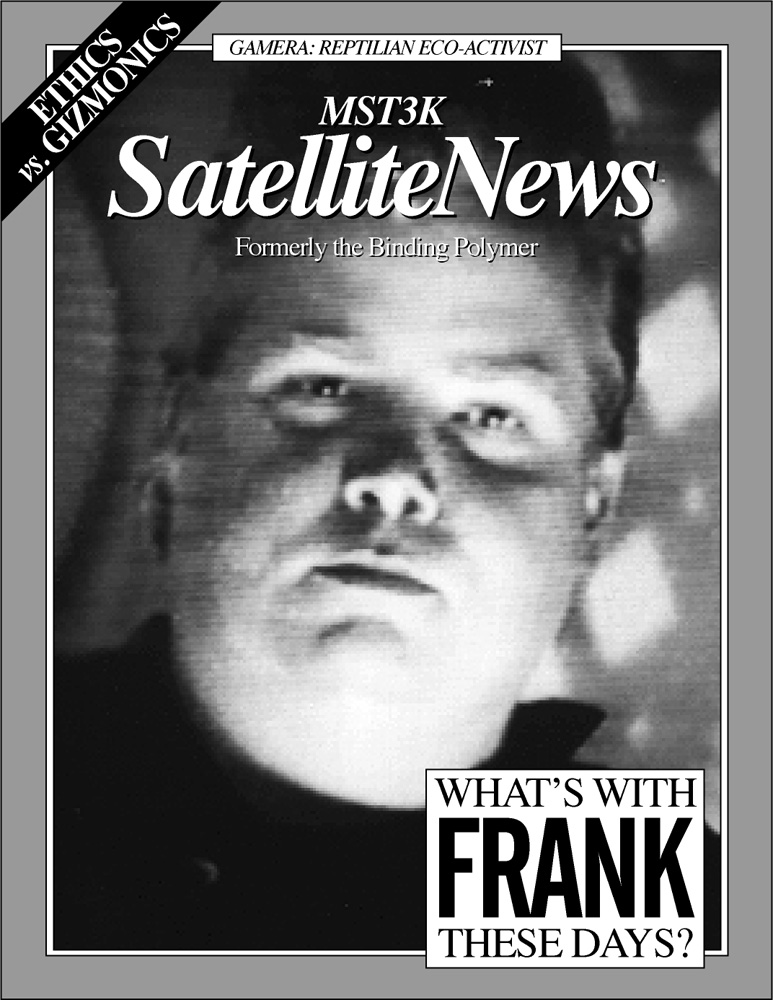 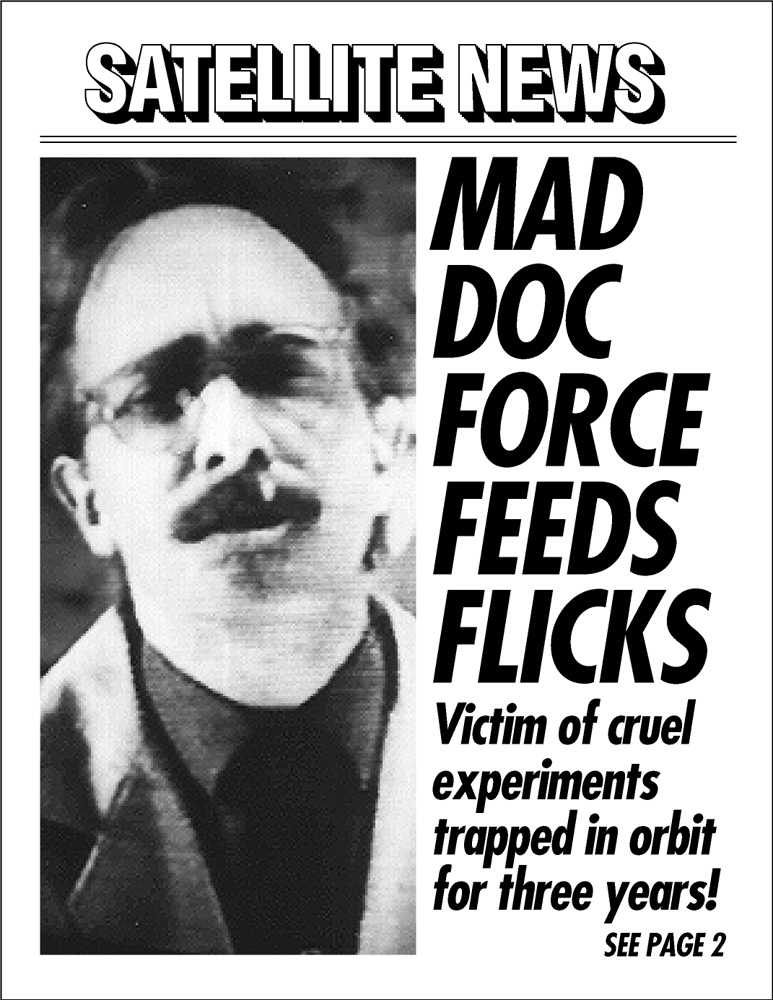 My mock “redesigns” of MST’s fan newsletter, Satellite News (Formerly The Binding Polymer), left to right, top to bottom: The original, as Business Week, as Scientific American, as Popular Science, as Popular Mechanics, as Byte, as Vanity Fair, as Utne Reader, and as The New York Post.

A day or so later, the phone rang. It was Jim Mallon, producer of MST3K! He wasn’t interested in me doing the newsletter, especially for free—that would taking advantage of me. But he loved the “redesigns” and they might have some work for me. He invited me down to the Best Brains offices to talk. I was very excited. Pat was very jealous.

The next day, I showed up at BBI, along with some samples of my work. There must have been some sort of mix up because I had to wait almost an hour. People kept coming up to me to ask if I had an appointment. While I was waiting, I could hear someone editing promo spots for the first of their yearly “Turkey Day” marathons.

At last, Jim Mallon appeared and started off by giving me a tour of the facilities. Along the way, I got to meet most of the people who worked on the show—Frank Conniff, Mike Nelson (who was head writer at the time), Trace Beaulieu, Kevin Murphy, tool master Jeff Maynard (the guy who made the props), Mary Jo Pehl, and Paul Chaplin. Joel Hodgson was out, and I had the impression that he wasn’t often in.

Among the things I saw on the tour:

After the tour, I met with Jim, Trace, and Kevin, showing them some of my work. It seemed to go okay. They told me they were working on some tapes to sell to fans, the first of which was a collection of musical skits from the show called, “Play MST for Me.” I was suddenly in some sort of brainstorming session, and they kept looking at me, maybe hoping for me to be as funny as them. I felt a little ambushed. They were the funny guys. I was a designer. Given the situation, I saw myself (potentially) as what Michael Gross was to the National Lampoon. He never claimed to be a “funny” guy, but he knew how to use design to serve “funny”. In any case, I agreed to come up with some concepts, and I left feeling like I was starting a new page in my career.

When I got home, Kevin Murphy faxed me the copy for the package and I earnestly went to work, arriving at my first concept: Fairly straightforward type with a very long “funny” disclaimer, which I wrote. I faxed it over and waited. This didn’t go over very well—they weren’t expecting me to write copy. I considered what I wrote to be “dummy” text—that they would rewrite it. That didn’t matter, they didn’t like it.

I did a second concept: A parody of a cheesy, sentimental, as-seen-on-tv kind of shlocky record album cover—complete with swash headline type for the title. They didn’t like this one either. It was a design joke and I guess they didn’t get it.

I did a third concept: A record on a turntable, seen from above, with the letters of the title flying off the disc as it spins, a sort of slapstick approach. This one didn’t seem to grab them either, but I don’t remember why.

At this point, the project seemed to be stalled. I thought the ideas I sent them had potential, and could be developed further, but I wasn’t getting much feedback. It seemed almost as if they expected me to “wow” them with a fully-formed idea. I was expecting more back and forth. After a week went by, I called Jim Mallon to find out what was going on. He seemed surprised that I was calling—basically saying “don’t call us, we’ll call you”, and I never heard from them again.

One theory I have is that Trace Beaulieu had been doing all the “design” work, liked doing it, and wasn’t really interested in having anyone else do it. Or maybe they just didn’t like what I did. Or maybe I should have been more proactive, educating them about how to work with a designer. Who knows.

The important thing is, I got a personal tour of Best Brains. I think Pat is still jealous about that.