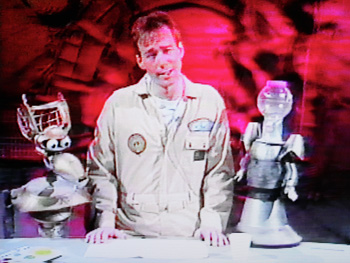 Joel Hodgson and the bots on KTMA in 1988

I accidentally discovered Mystery Science Theater 3000 during its initial run on local Twin Cities channel KTMA-23 in 1988. It was very strange—and very funny. Some guys seemed to be talking—cracking jokes—during some awful movie. You could see their silhouettes at the bottom of the screen.

This was in the early days of my relationship with my partner, Pat. We were the kind of couple who went to a Rocky & Bullwinkle film festival on our first date. This show was made for us. We were soon tuning in every Sunday night to watch it. It was the funniest thing we’d ever seen. We became members of the fan club.

But it didn’t last long. Before we knew it, the show was cancelled. As a thank-you to the fans, they put on a live show in 1989 at the Comedy Gallery in Minneapolis. 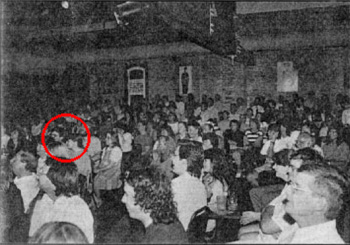 A photo of the audience at the Comedy Gallery event that appeared in the MST 3000 Satellite News, Vol. 1, No. 2. You can see me and Pat on the left.

The show was great and featured clips from the show’s pilot, plus cast members/writers Joel Hodgson, Trace Beaulieu, and Josh Weinstein performing their comedy acts. During a question and answer session near the end, Pat got to ask a silly question about the Tom Servo puppet. She wanted to know how the mouth (beak?) worked. It was kind of complicated. When it was over, we got to meet and shake hands with everyone on the show, and that was that—so it seemed. 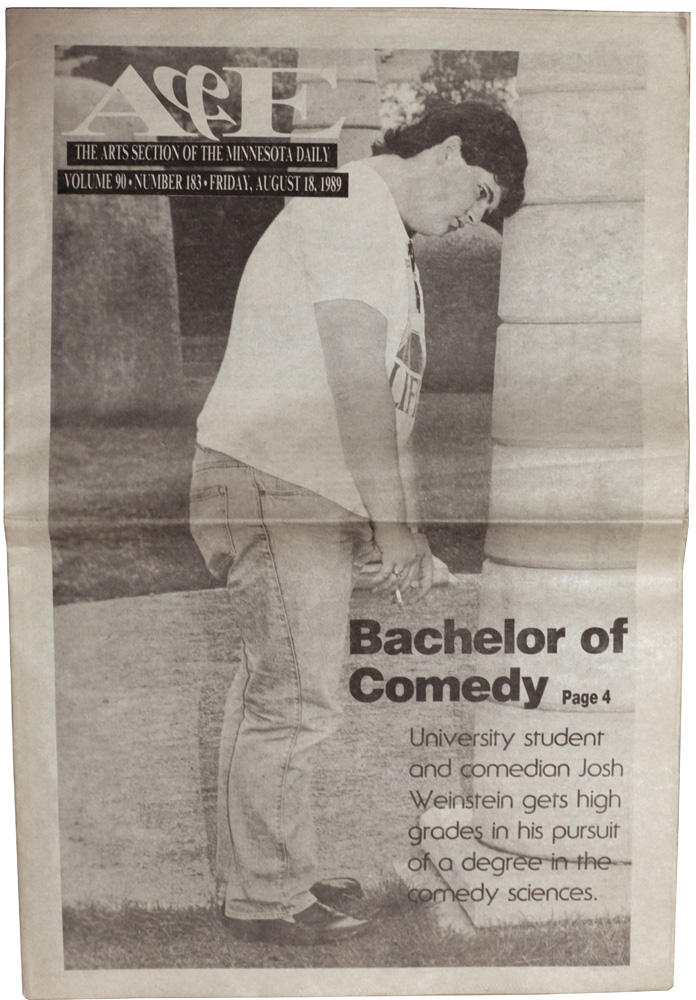 Josh Weinstein, on the cover of the Minnesota Daily’s arts section, around the time he performed at the U of M’s student union.

Later that year, we saw Josh Weinstein do his stand-up act at the University of Minnesota student union (he was still an undergrad there), and at the end of it, he revealed that talks were ongoing with HBO to bring Mystery Science Theater to cable tv. Our hopes to see the show again were dashed, however. Our cable company carried HA!, but MST’s new home was on The Comedy Channel, which they didn’t carry.

We missed the first season, but by the second season, the two rival comedy channels merged to become Comedy Central, and—more importantly—we got to see our favorite show again. By this time, Josh was off the show, replaced by a new guy, Frank “TV’s Frank” Conniff. And this is were things get a little weird.

At the time, we were living in the Whittier neighborhood in South Minneapolis. MST was a national show, but it was produced out in a Minneapolis suburb, Eden Prairie. But some of the guys on the show must have lived in our neighborhood because we started seeing them. One day, while driving down Hennepin Avenue, we both did a double take—TV’s Frank was walking down the street. Maybe a week later, we saw him come out of our neighborhood convenience store. Another time, I went to my usual coffee shop, and Trace Beaulieu was behind me in line. This encounter was stranger still when I think about it: The woman who served us coffee was someone Pat and I knew, Kristen Pfaff, who would later become the bass player in Hole (Courtney Love’s band) and die of a drug overdose.

The most awkward encounter happened sometime around 1991 at Calhoun Square, a shopping mall in Minneapolis’s Uptown area. I spotted Joel Hodgson (wearing sunglasses) seated outside a restaurant near the bookstore we were headed for. I whispered to Pat, “It’s Joel.” She didn’t see him, and said aloud, “What? Where?” By now we had passed him and I whispered, “He’s right behind us.” He must have heard us, because when we looked he was looking back at us. We walked quickly into the bookstore. I pretended to look at some books. When I looked up, Hodgson was standing near the entrance, peering around the corner over his sunglasses, like he was spying on us. Pat had disappeared. I was so embarrassed, I didn’t look up again for a while. The whole thing was very weird and silly.

In 1992, we saw them all again, but this time as part of a live performance of Mystery Science Theater at the Uptown Theater. It was one thing to see it on television, but seeing it performed live with 600 other people was incredible. I don’t think I’ve ever laughed so hard in my life. My face was so sore. 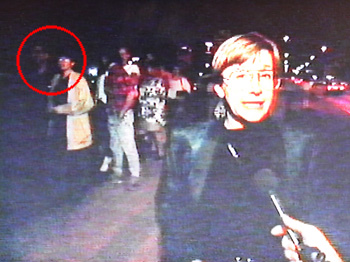 Me and Pat, visible in the background during a Comedy Central video interview outside the Uptown Theater in Minneapolis, waiting in line to see Mystery Science Theater Alive!

Tomorrow: How I almost became a designer for Mystery Science Theater.