One more follow up on the item I posted last week, in which I mentioned my uncle Knut who worked as a designer at Container Corporation of America…. After I posted that, Knut sent me a photo of the cookie package he designed: 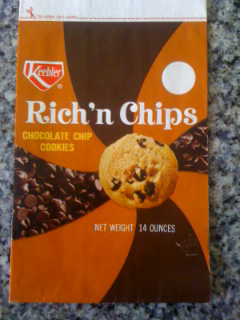 This was (I believe) one of the first packages for Keebler chocolate chip cookies, and my uncle’s first printed package design. It debuted in July 1967. It seems so tasteful and restrained compared to the modern equivalent.

I was very impressed by this as a budding artist. It put into my mind the notion that, if you were good, your work could be seen by millions of people. Definitely something I was attracted to very early on, and probably something a lot of artists and designers can relate to.