I’ve always had a rather vague grasp on the history of New York City. So, before taking a trip there this last summer, I rented Gangs of New York (Miramax, 2002), hoping to learn some of it. I realize the film is not perfectly historically accurate, but I really enjoyed watching it. Scorsese did a wonderful job with the story, the characters, and the setting, making me feel like I had stepped into New York City of the 1860s. However, as I’ve come to expect with Hollywood movies, the typography was a bit off base.

For the most part, the type choices in Gangs of New York are plausible in terms of general feel. In many cases, common 19th century wood type designs are used, especially on posters, appropriately enough, though some of these look a bit too distressed, as if they were enlarged from microfilm copies or something. Most of the signs on buildings were right on the money. I thought this one was pretty good: 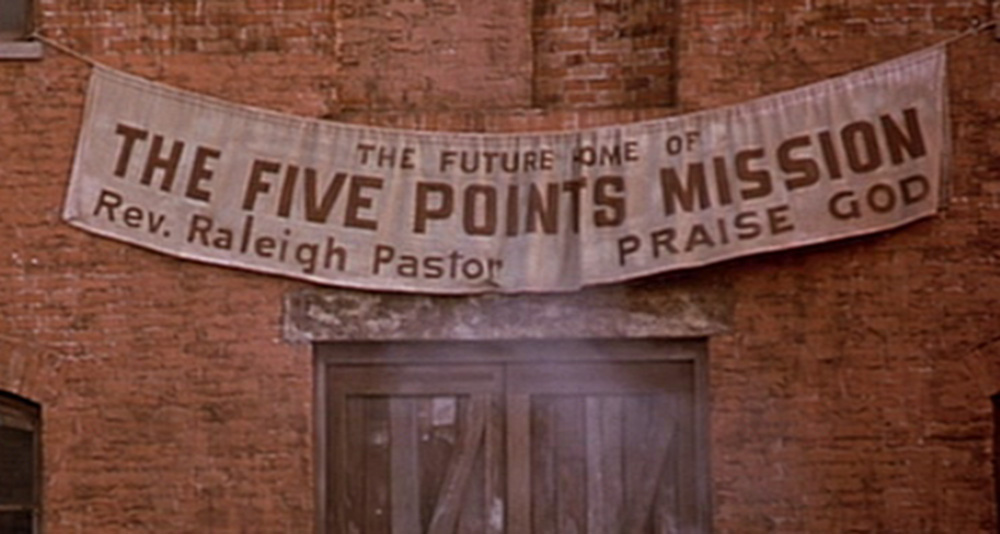 On the other hand, the movie is riddled with anachronistic type choices. Here are some examples from posters:

Here we see Bernhard Antique (1937) with two overly-distressed-looking 19th century wood types. Notice the straight apostrophe in the bottom line. Straight apostrophes and quote marks did not exist in typefaces until the advent of digital type in the 1980s. It’s a computer thing, not a typographic thing. 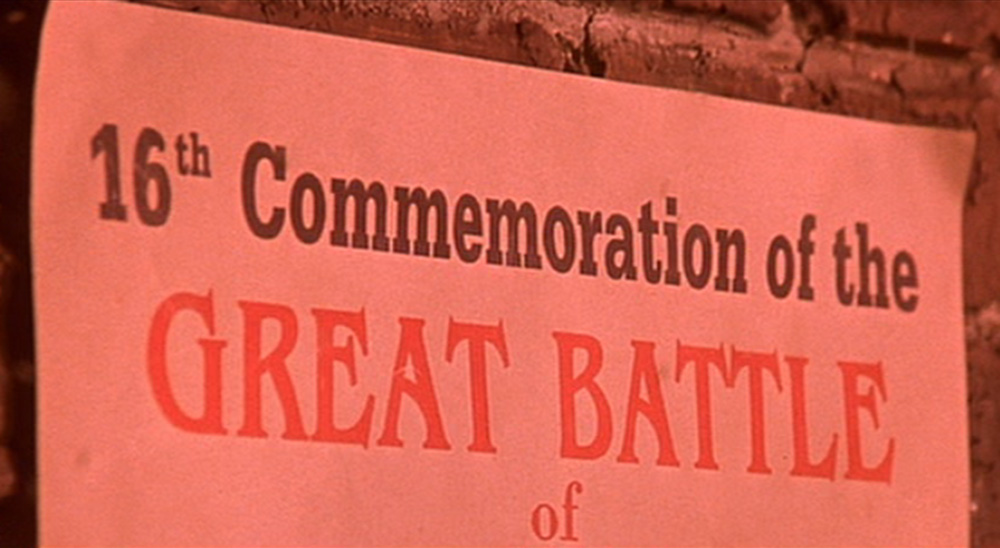 This one is set in URW Egyptienne (1950s) and ITC Benguiat (1977). Benguiat is a particularly poor choice since it is based on the Art Nouveau style of around 1900. Benguiat shows up on a couple more posters in the movie. 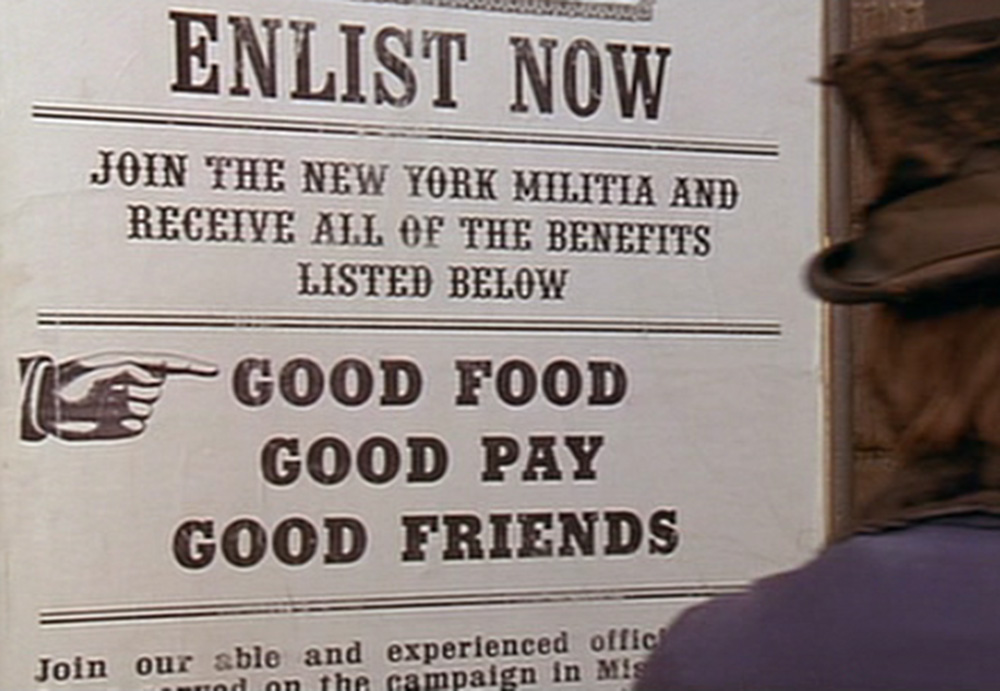 This is better, but not 100% historically correct. The bold font next to the pointing finger is Rockwell (1930s). 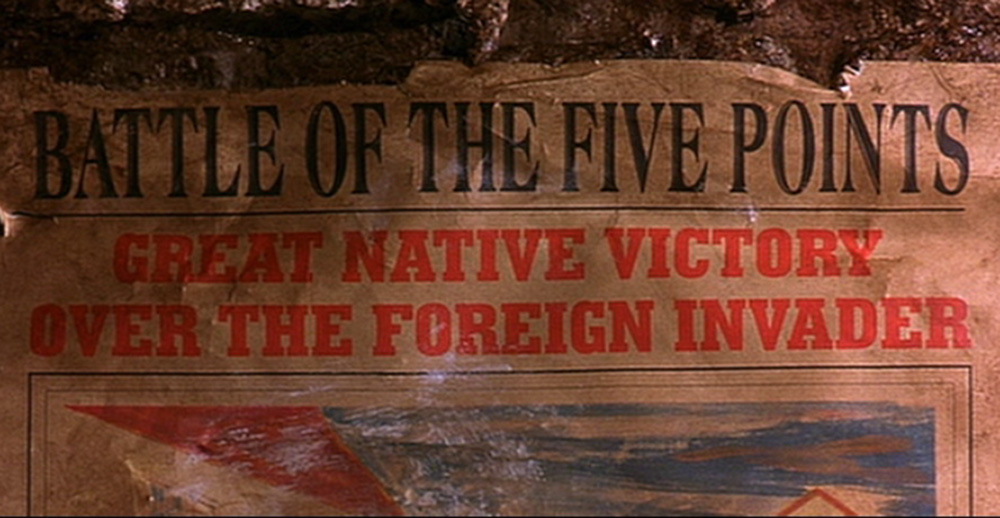 Here we have some artificially condensed Americana (1967) with Memphis (1930s). You couldn’t distort type by condensing it like this back then. It was made of wood or metal, after all.

Now this is interesting. Avenir (1988) carved in marble. Few typefaces say “1860s” less than Avenir, which means “future” in French. It would actually be quite an evocative choice for a film set in the early 2000s. It’s very popular these days.

On to the printed ephemera, starting with newspapers: 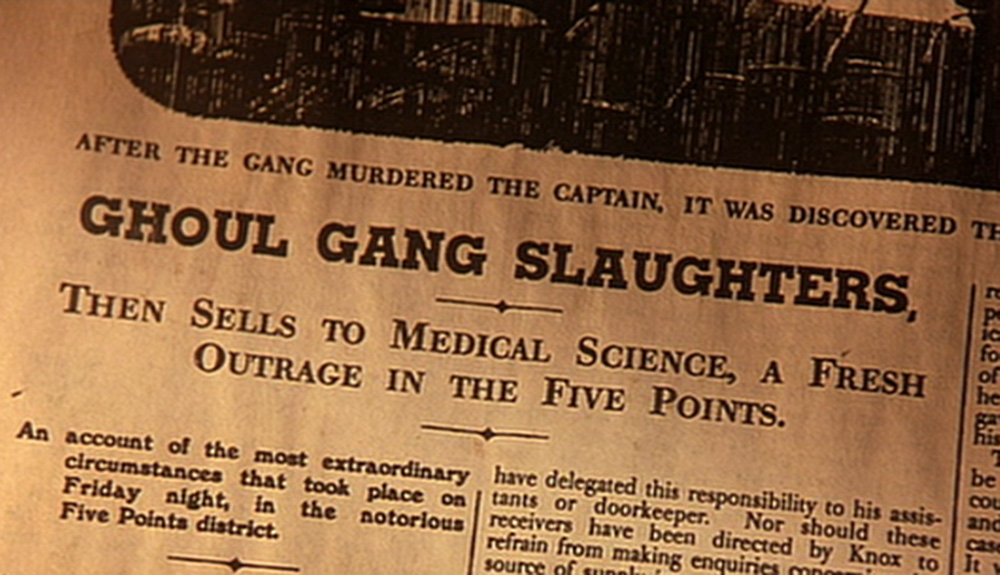 Good old (actually not so old) Memphis, again, paired with Caledonia (1940). I should point out that the way they set the type here looks right; it’s just the font choices that are wrong. There were typefaces back then that looked generally similar to these to the untrained eye, but not exactly like these. (9/5/13 Update: Eagle-eyed reader Anton Sherwood also spots Windsor (1905) in the small bold text on the left.) 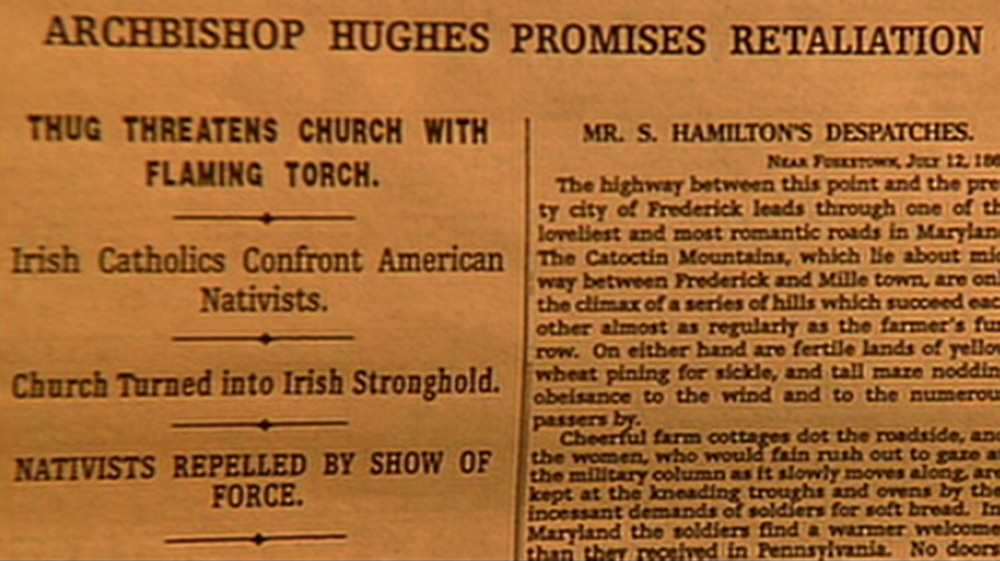 The same comments go for this one. The sans serif is Helvetica (1957) and the serif font is Egyptienne (1956). 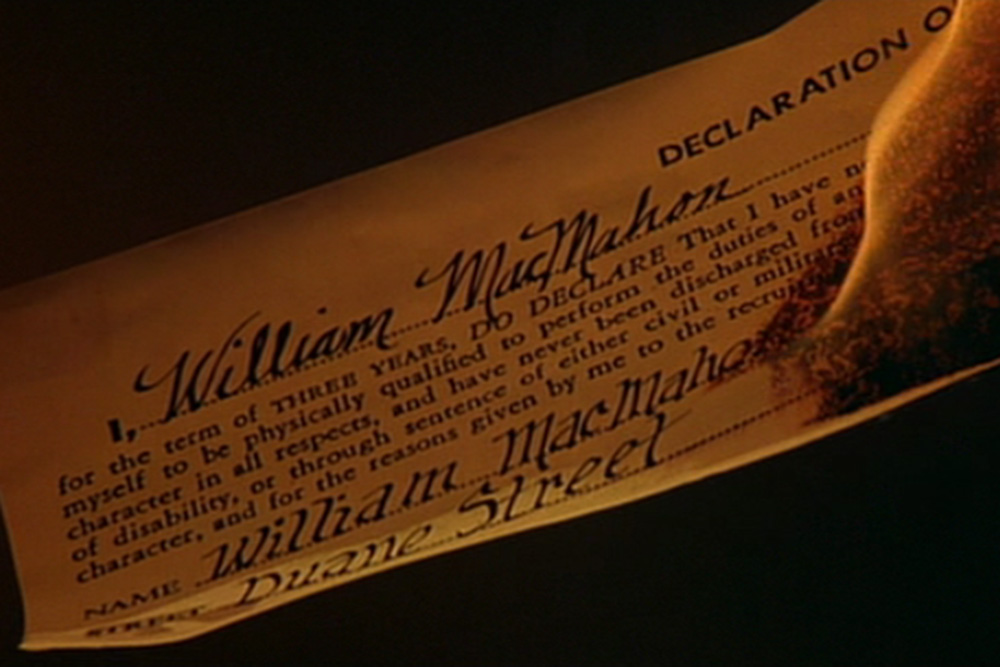 This one I love. It’s a civil war draft registration ticket. The heading is set in Futura (1927) and the text is set in Garamond (c. 1920). Now, you might say Garamond should be okay because the original Garamond types were from the 1500s, which predates the 1860s. The fact is, they were only used in the 1500s and similar types were not seen again until they were revived around 1920. I’m not sure about that handwriting at the bottom, either.

So. A great movie, but a bit flawed in the typographic department. Three out of five stars for use of type.