You might wonder: Where does a type designer like me spend his days? Do I have a fancy office in a skyscraper in downtown Saint Paul? Do I have a receptionist? An H.R. department? Interns? An espresso bar?

None of that. I work by myself out of a repurposed back bedroom in a modest 1920s-era bungalow in the quiet residential Saint Paul neighborhood of Saint Anthony Park. Let me show you around.

My studio is not always as neat and tidy as it looks in these photos, but I do try to keep it that way when I can. When I’m deep into a project, it gets very messy very quickly. 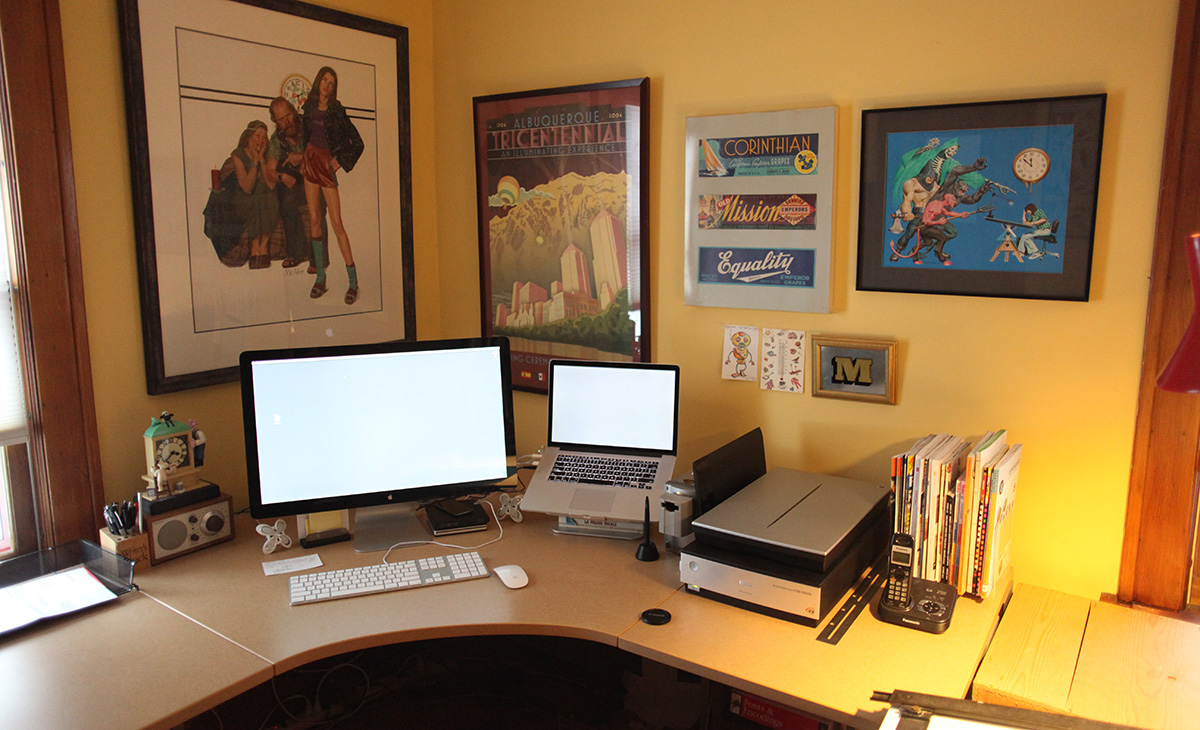 Here’s the desk where I do most of my work. Right in the middle is my computer, an Apple MacBook Pro (Retina). The retina display is not quite as useful as I expected, but I love working in a quiet environment, and this model is not only quiet but also very fast, thanks partly to its solid state design. Attached to it is a 27-inch display. When making fonts, the bigger the display, the better.

I mostly work in Glyphs, a relatively new font editor for the Mac. Adobe Creative Suite (Photoshop, Illustrator, and InDesign) come in handy a lot. For writing, I generally use TextEdit. For coding (Python, OpenType features), I use either BBEdit or TextMate. For the internet, I use Apple Mail and Safari. Lastly, for testing things on Windows and running the occasional Windows app, I use VMWare.

On the wall to the left is a piece of original illustration art by Mara McAfee that appeared on the cover of the August 1978 issue of National Lampoon magazine. I bought it a few years ago from Michael Gross, former NatLamp art director, who appears in the painting as the aging hippy dad (hash pipe in his mouth), sternly rebuking his daughter for staying out too late. Oh, the irony. (Brooke Shields and her mom portrayed the daughter and mother in the painting.) Michael, who died in 2015, was one of my heroes when I was as an art director.

To the right of that is a beautiful poster for the Albuquerque Tricentenniel that features one of my fonts, Mostra. Further to the right are some nicely lettered fruit crate labels, an original cartoon drawing of a robot by John “Robot Johnny” Martz, a mercury thermometer featuring drawings by Eric Hanson, and a letter “M” designed and gilded onto glass by John Downer. 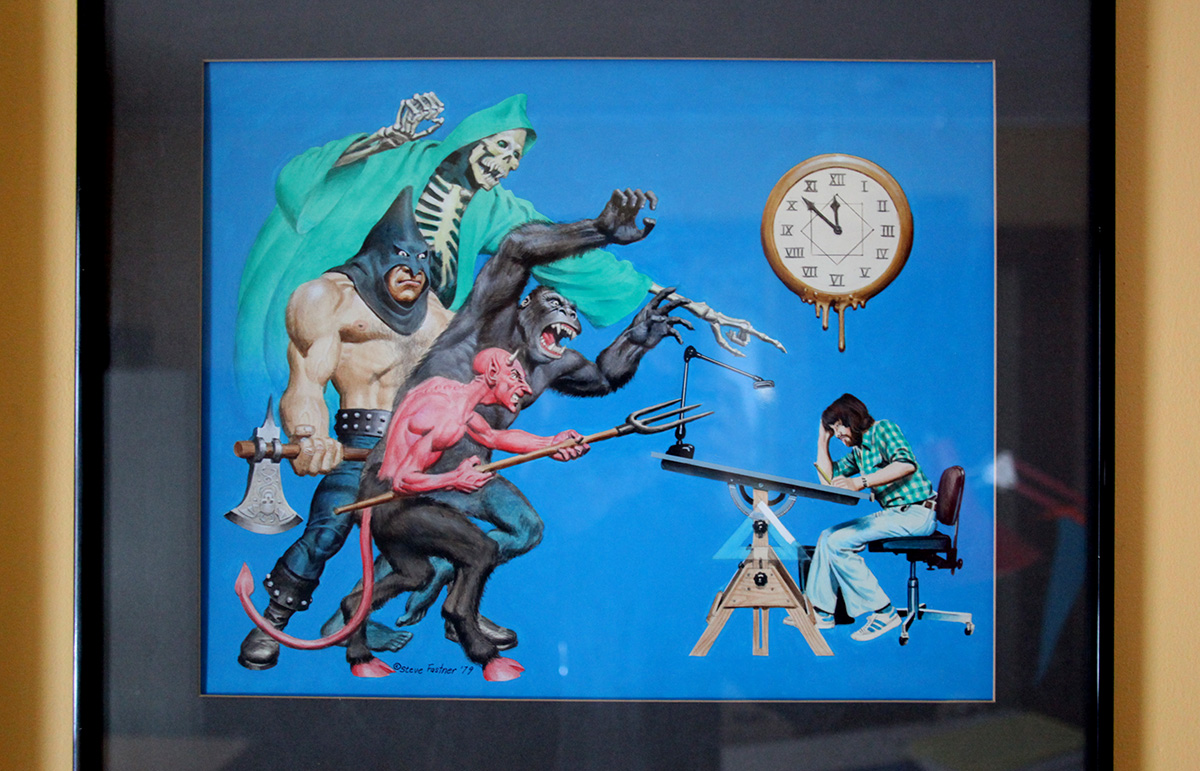 Here’s a close up of the piece on the far right, an original painting by a former colleague of mine, illustrator Steve Fastner. It’s from 1979 when we both worked at a small advertising art studio. It was a part of a series of paintings depicting things like “Meeting With the Client” and “Change Requests”. This one was called “The Deadline”. That’s me on the right, working at my drawing board. 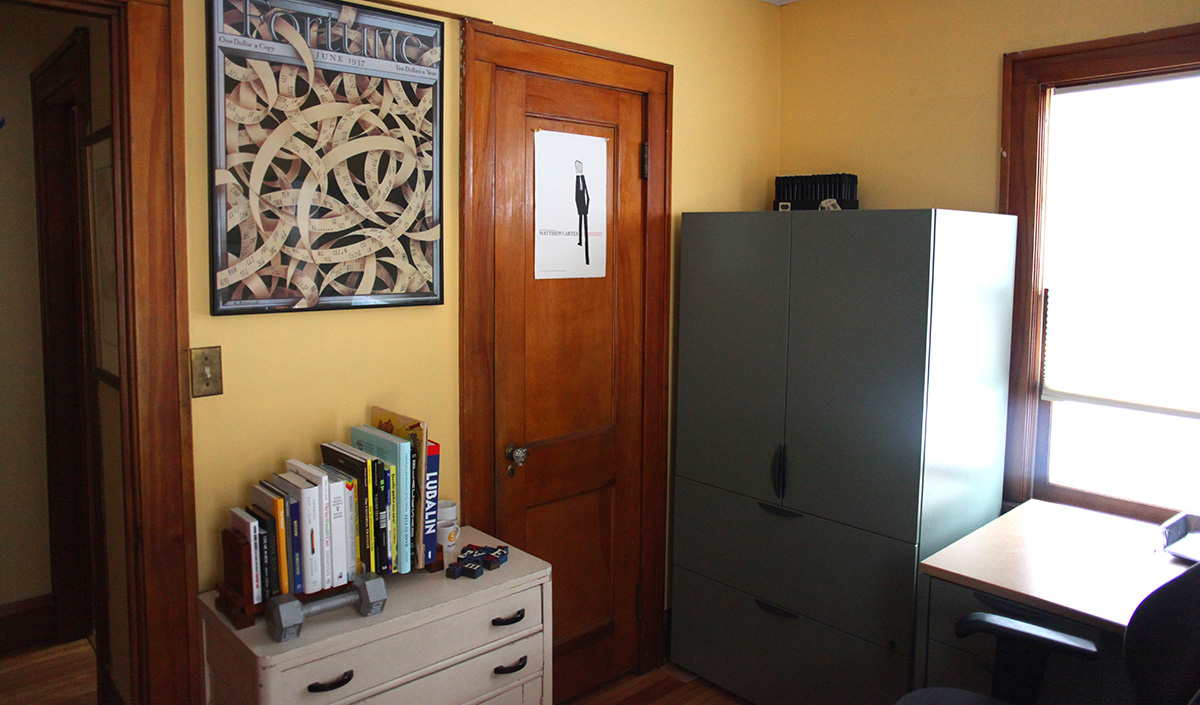 To the left of my work area is a large storage cabinet where I keep all my drawing materials and files. That small white cabinet is mostly printer supplies and junk like 3D glasses and batteries. The closet is used for more long-term storage, including things like font sightings torn out of magazines. The poster above the white cabinet is a reproduction of an old Fortune magazine cover, and the poster on the closet door is the one Cyrus Highsmith did recently commemorating Matthew Carter, one of my type design heroes. On top of the green cabinet is a set of AD markers (look it up) I’ve had since college back in the ’70s. They still work, although I don’t use them much. I keep them around as a reminder of where I started. 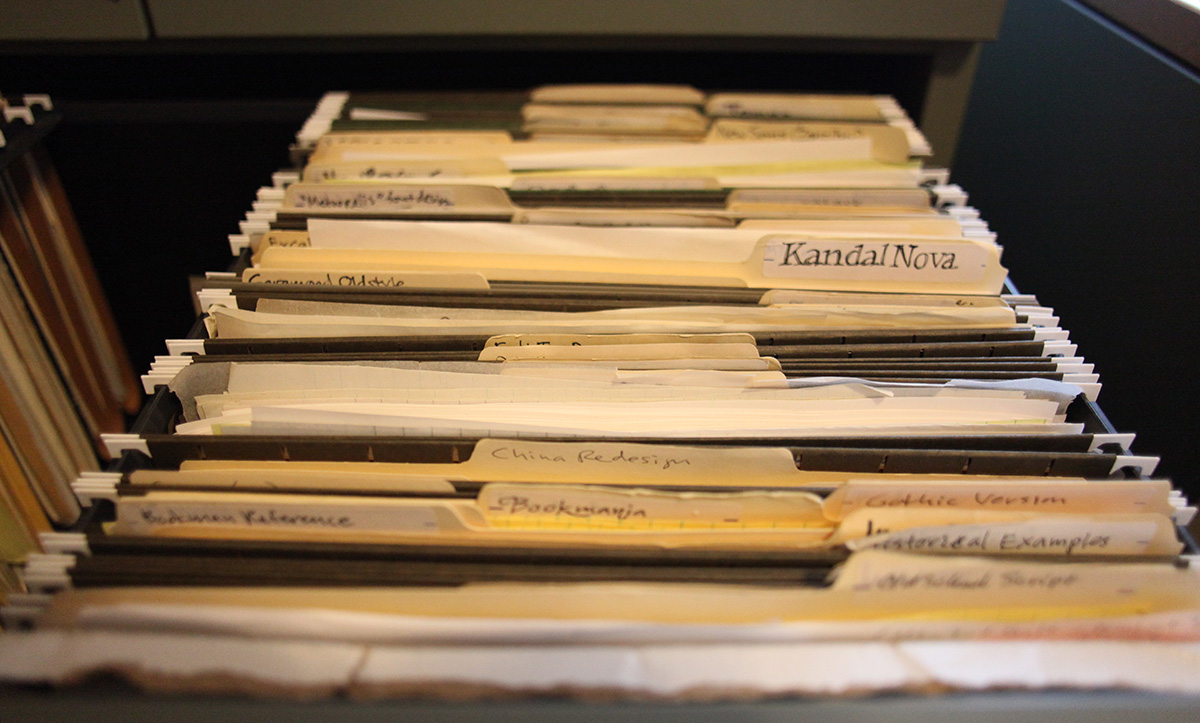 Here are some of the files in that big green cabinet: Every typeface design I’ve started, not all of them finished. These folders contain things like sketches, reference material, and test prints. I’ve also got decades worth of “font ideas” in another drawer—anything from random doodles to deliberate concepts. The most promising ones end up released as fonts. 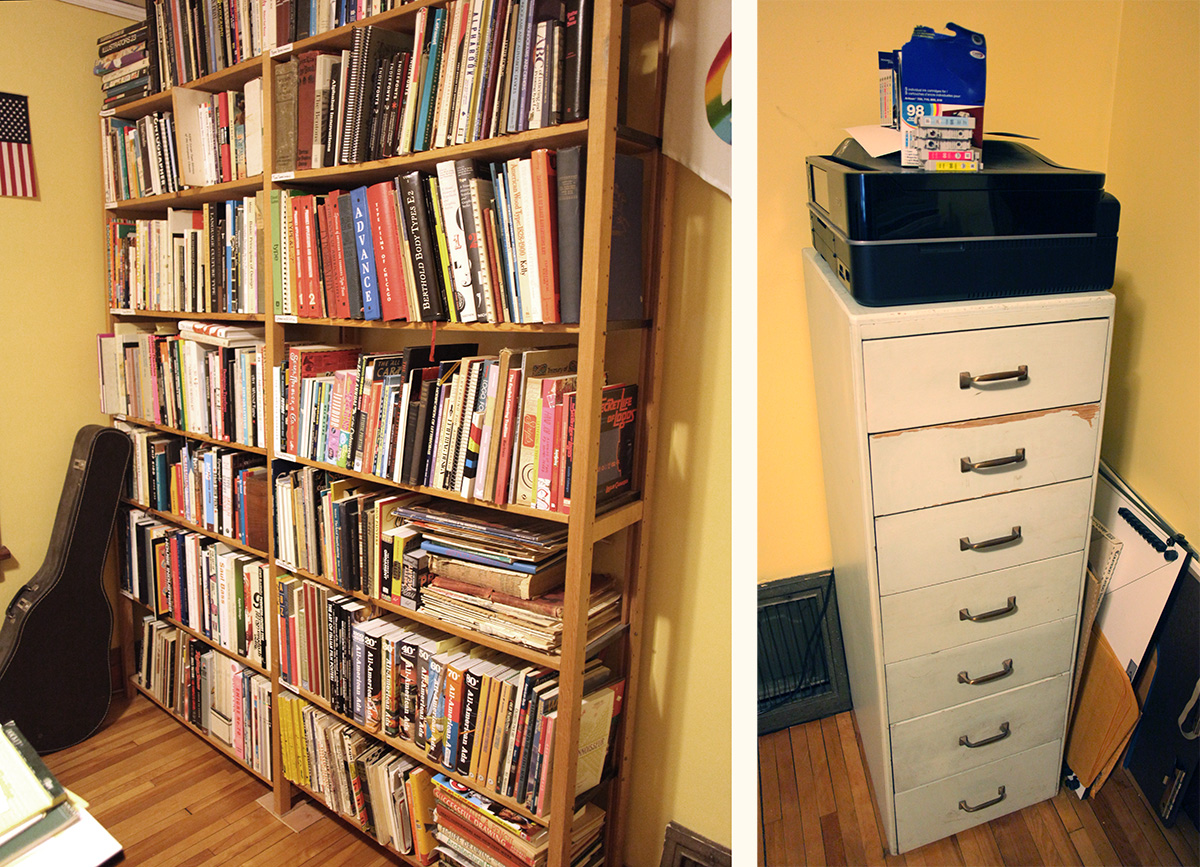 The photo on the left shows my main “library” which includes most of the books about type and typography I own, plus type specimen books, designer and artist monographs, style reference, lettering books, and even a few drawing and computer programming books. This book case is on the opposite side of the room from my computer desk. The guitar case contains a guitar that I used to play a lot. I put it there to remind me to play it. Hasn’t really worked so far.

The tall cabinet in the photo on the right contains mainly ephemera—old magazines and books that have cool lettering and typography that inspire me. That inkjet printer on top gets used pretty rarely. I don’t use it for proofing fonts. I have a Ricoh laser printer in another room for that (not shown). 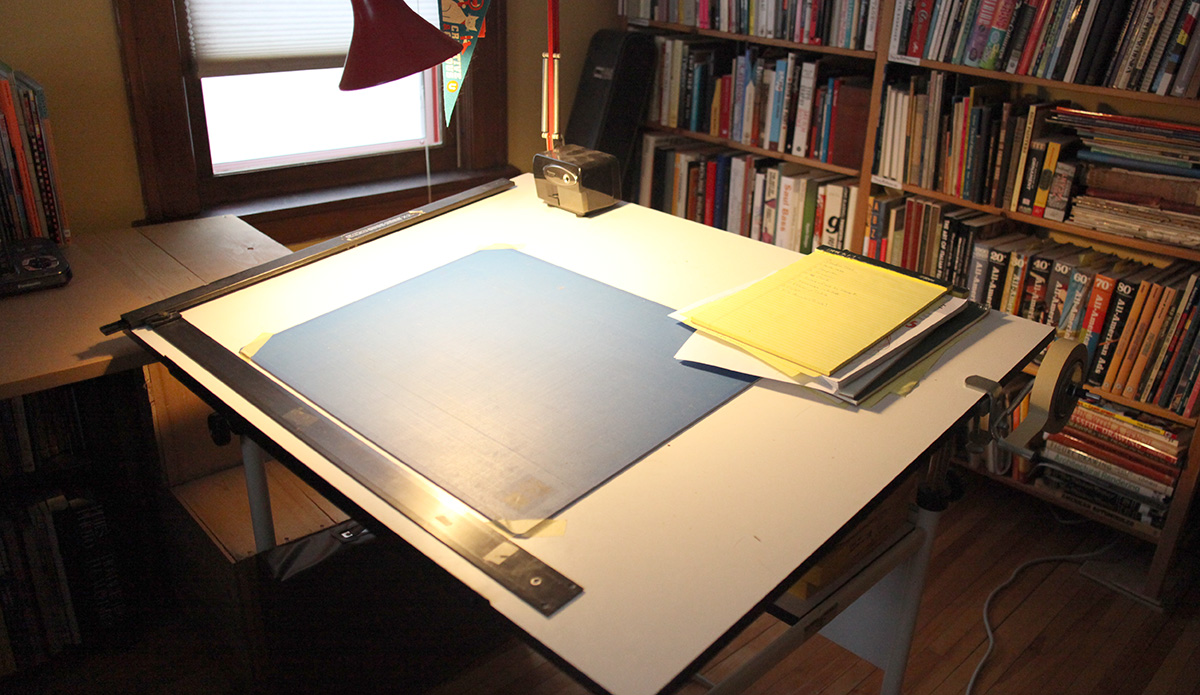 In the middle of my studio is this drawing table. You can tell I’ve had it a long time from the Ulano Glide-Liner attached to it. It’s a straight edge that slides up and down so you can keep horizontal lines parallel. Add a right triangle and you can do the same for vertical lines. Useful for paste-up and hand lettering. Nowadays, I use it as a drawing surface for when I’m making sketches or for looking at large-format books. The Glide-Liner doesn’t get much use.

That’s an electric pencil sharpener in the corner. Best thing ever if you like to use pencils. There’s a light table down there in the shadows that you can almost see. I don’t use it much anymore, but it’s very nice to have around when I need it.

That’s about it. Thanks for visiting!